Ursula Burns, The First Black Female Fortune 500 CEO Says ‘Being In The Minority Can Be A Career Advantage’ 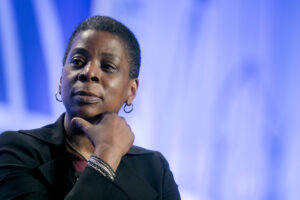 Ursula Burns, The First Black Female Fortune 500 CEO Says ‘Being In The Minority Can Be A Career Advantage’

When Ursula Burns became the CEO of Xerox in 2009, she didn’t consider it a milestone achievement; then, she began receiving calls from Magic Johnson, Al Sharpton, and others.

It wasn’t long before she realized she was the first Black female CEO of a Fortune 500 company. Although Burns felt a bit overwhelmed, her work ethic, drive, and the fact that she was comfortable being the only Black person and woman in the room kept her in the position for six years.

Burns told CNBC she never minded being the only Black woman in the room and considered it an advantage.

“If I raised my hand in any meeting, almost surely, it was called on,” Burns said.

“You’re so different that, at least in open spaces, they can’t ignore you.”

Burns was born in Panama and moved to the U.S. when she was two. According to the former CEO, she and her two siblings were raised by their mother, who cleaned offices and did childcare work. She also taught her three children to go out and make things happen for them, often telling Burns and her two siblings, ‘where you are is not who you are.’

Her mother’s advice led Burns to Columbia University and a career where she knew she’d be one of a few in the room. Even when there were Black people in a room, it was mostly men, but again, being one of the few in the room never bothered Burns. Rather it drove her to stand out.

“My natural comfort is being the only or the few in a room — I was always a little bit of a loner, so it didn’t bother me,” Burns said. I became very good at playing in that space.”

Burns was truly in a space by herself while she was the CEO of Xerox.

Three things that Burns said helped her get to a CEO position were a strong work ethic, a desire to solve almost any problem, and being a minority, which she felt was more of an advantage than a disadvantage.

“If I had an idea, people would listen. They may not always comprehend it or agree, but being the minority turned out — at least, at Xerox — to be an advantage,” Burns said.